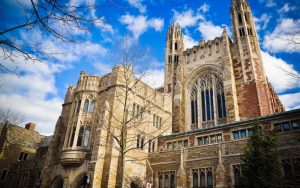 Yale Law School had such a positive experience hosting Kristen Waggoner of the Alliance Defending Freedom, an SPLC-recognized hate group, that it decided to give it another whirl! The last time resulted in a protest that got right-wing media madder than a gas stove ban at a critical race theory symposium. After taking its turn as a Wall Street Journal punching bag, some grandstanding federal judges threatened to boycott the school, and the school issued a new set of oxymoronic “freedom of speech rules” that earned derision from right and left.

In the same week that Harvard Law School deals with the aftermath of anti-LGBTQ+ violence on campus, we learn that Yale yet again lent its credibility to mainstreaming anti-LGBTQ+ discourse. When the Federalist Society invited Waggoner back for another round, the school took steps to silence anyone who might want to exercise their freedom to speak in opposition.

Because while Yale Law School’s policies have changed over the past year, its guiding principle hasn’t: “free” speech is a one-way proposition. It flows from the lectern down. From Yale’s perspective, if the powers-that-be choose to give a speaker a microphone, that person is blessed with the holy right of speech and the role of the audience is to shut up and absorb the lessons of their betters.

What a curious take from an institution that sees itself as a chosen gatekeeper of elite credibility!

The Washington Free Beacon, an outlet that routinely functions as the press arm for Federalist Society groups seeking 15 minutes of fame through campus outrage stunts, helpfully and unsurprisingly has all the details:

Now Waggoner is returning to Yale Law for another talk. And this time, administrators aren’t leaving anything to chance, banning press and anyone without a Yale Law School ID, including undergraduate students, from the event. They are also trying to prohibit covert cell phone recordings, which picked up audio of last year’s disruption. It is not clear whether the ban on media includes the Yale Daily News, Yale’s flagship student paper, whose editor in chief, Lucy Hodgman, did not respond to a request for comment.

Yes! This is a problem, isn’t it? It’s almost as if regulating speech to shield invited speakers from scrutiny actually undermines freedom writ large.

This has been our consistent take from the start. Schools should promulgate time, place, and manner rules that allow speakers to speak for their designated time (rules that the original protest followed, which is why no one got punished despite the squawking of some professors). But schools cannot get in the business of silencing or terminally sidelining counterspeech. Because going down that road ends up silencing all sorts of speech, including the press.

But let’s have a round of slow claps that the Beacon is starting to piece it together.

The event, scheduled for noon on Tuesday and hosted by the Federalist Society, will also feature Nadine Strossen, the first female president of the American Civil Liberties Union. Yale’s draconian measures aren’t sitting well with her. She is calling the school’s decision to ban the press “unjustifiable,” telling the Washington Free Beacon, “For an event that is discussing important First Amendment issues—and is designed to illustrate Yale Law School’s announced recommitment to free speech—it is sadly ironic that elementary freedom of speech principles are being violated.”

It’s only “sadly ironic” if you thought anything about Yale’s new policy and its disgracefully toadying to media bullying amounted to a commitment to free speech. If you saw it as a top-down effort to curtail dissent that only situationally pleased conservatives, well….

In that case, this isn’t ironic at all.

The Law Schools With The Most Conservative And Liberal Students (2023)
Posted on Thursday February 02, 2023

Start Hitting Yourself: Chemerinsky Considers The Interesting Question Of When A State Can Sue The State
Posted on Wednesday February 01, 2023

The Best Law Schools In America For Career Prospects (2023)
Posted on Wednesday February 01, 2023

Where The Most Wannabe Lawyers Live
Posted on Tuesday January 31, 2023

The U.S. News Ranking Methodology May Have Changed, But Law Schools Are Still Dropping Like Flies
Posted on Monday January 30, 2023

Law Professor Eager To Share All Sorts Of Awful Thoughts About Trans Folks And Racial Justice!
Posted on Monday January 30, 2023