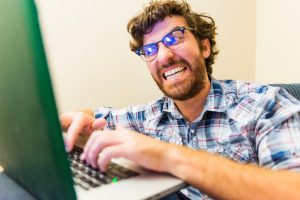 GIVE ME THE NAME OR DOZENS OF MILLIONS OF DOLLARS!!!

What’s in a name? As it turns out, slavery from time to time. As earlier discussed, the University of Richmond Law School, as they are well within their power to do according to their naming guidelines, decided to remove homage to T.C. Williams — a slave owner, by changing their name. This wasn’t anything particularly out of the ordinary; Carey Law was once known as Penn Law. (It is still known as Penn Law, but that is a story for another time.) As it turns out, one person gave enough of a damn to write mean-spirited letters to University of Richmond about the name change, namely Rob Smith. From The College Fix:

The University of Richmond recently removed the name of T.C. Williams, an early benefactor, from its law school because of his alleged ownership of slaves in the 19th century.

But his descendants say Williams contributed to the demise of slavery and now argue the university should refund Williams’ previously donated money to the institution.

I’m interested in the “contributed to the demise of slavery” claim. Did T.C. Williams contribute like Thomas Jefferson did — that is, extoll its injustices in one breath while demanding his speaking implements brew whiskey with the next? Or was it one of those symbolic “contributions,” where you act in a movie about slavery and consider that sufficient to wipe your hands of blood? Either way, my brain immediately added one of those Wikipedia “citation needed” tags to the sentence.

“If suddenly his name is not good enough for the University, then isn’t the proper ethical and indeed virtuous action to return the benefactor’s money with interest? At a 6% compounded interest over 132 years, T.C. Williams gift to the law school alone is now valued at over $51 million, and this does not include many other substantial gifts from my family to the University,” Rob Smith, Williams’ great-great-grandson, said in a letter to President Kevin Hallock.

“Moreover, is it not a form of fraud to induce money from a benefactor, and then discredit the benefactor after he is long dead? Surely, the Williams family would not have given a penny to the University knowing that the University would later dishonor the family. The ethical and virtuous decision is clear. Return the money.”

First off, dude, it is 2023. Who the hell writes like that?! This is one ergo or hitherto from being an undergrad trying to puff up their chest as they answer a prompt they didn’t do the required reading for.

Second, this whole thing reeks of bad faith. Why? The man is arguing that he (and his family) are owed something because of a gift. A gift is not a quid pro quo or some contract that extends in perpetuity — gifts generally do not carry consequences with them if they are refused. Gifts, as commonly understood by anyone who has ever given or receiving one, do not come tethered with expectations of compound interest over a course of years if it turns out to be the case that the gift giver relinquishes the object at some point in the future. No one  in their right mind, upon finding out that their cousin took some gifted soaps and their receipt back to Bath & Body Works to get cash or store credit, yells out, “VERILY, I WILL SEE YOU IN COURT, GOOD SIR!”

Not to mention, merely focusing on the initial capital bypasses the reason that his name was shed. It’s fucking blood money. It’s not even like it is the money T.C. Williams worked for; it is wealth that his slaves earned that he then appropriated from them. You can’t bypass the fundamental ethical obligation to the school bearing his name, namely chattel slavery, while still making common sense appeals to “ethics, virtue, and honor.” I think that the puffery of the wording likely hides that this is just a disgruntled great-great-great grandson trying to harness a windfall because he, by virtue of his bloodline, presumably feels entitled to the profits taken from slave labor. There’s hardly anything ethical, virtuous, or honoring about that. Said entitlement may explain why, after several lines of bad poetry pretending to be argument, Smith drops this gem:

In Rob Smith’s letter to Hollack he also pointed out the hypocrisy of the institution.

“Since all history has to be erased, perhaps you can eliminate the history department and use the money to buy therapy dogs, cupcakes and cotton candy for all those poor souls triggered by facts. Then again, you could use the money to bolster your Campus Ministry of Truth and just eliminate facts. After all, facts are bad, they make snowflakes cry.”

Only snowflake I’m seeing here is you, buddy. Oh, and in case you were wondering, the meat of Smith’s “Williams fought to contribute to the demise of slavery” bit? Someone in his family line hired some sharecroppers. That’s not really the own he thinks it is.

Earlier: Everybody With T.C. Williams In Their LinkedIn Profile May Consider Changing It