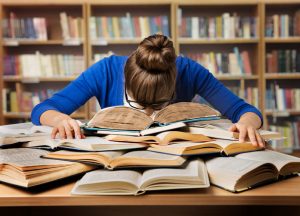 When reading about a woman pleading guilty to trafficking 28.5 kilos of cocaine, the first question is, of course, why does the federal criminal justice system still measure drugs in kilograms? This is AMERICA, dammit. Where’s Marjorie Taylor Greene and the rest of that posse with resolutions to get this woke metric system nonsense out of our courts?!

Anyway, there’s a second question you should ask when it comes to this case: law school? And a third: really?

According to a report in the ABA Journal:

Based on federal sentencing guidelines, people found guilty of trafficking large amounts of cocaine usually face lengthy sentences. However, a Texas defendant received what many say is an unusual punishment: five days in prison with credit for time served and direction from the judge to complete her JD.

Can we revisit the prison idea?

In all seriousness, Chief Judge Randy Crane of the Southern District of Texas issued the curious sentence, eschewing the average five-year prison sentence in favor of getting the defendant back to mastering crim law rather than being the subject of it.

She could have had what is known as “the girlfriend problem,” says Douglas A. Berman, an Ohio State University Moritz College of Law professor. The term refers to long sentences for women who may not be actively involved in “serious drug dealing” but participate in trafficking to preserve a relationship with a boyfriend or husband, Berman says.

“Maybe the judge thought requiring pursuit of a law degree would reduce the likelihood she’d get involved with the wrong folks,” says Berman, who writes the Sentencing Law and Policy blog.

The record in the underlying case suggests that she ran a trucking company that moved drugs for a Mexican cartel, which seems more involved than casually moving stuff for a romantic interest. But that’s also not the point. If the judge sees genuine remorse and an opportunity at rehabilitation and a professional future, this sentence is a lot better than letting someone languish in prison. I guess Judge Crane does not see any Better Call Saul potential here.

But this shouldn’t be an opportunity only afforded to potential attorneys. The ABA Journal cites Michael Heiskell, president-elect of the National Association of Criminal Defense Lawyers:

He adds that a purpose of the federal sentencing guidelines is to avoid disparities, so [defendant’s] sentence may be useful for defendants with cases similar to hers.

“You would want to make the argument of the courts being consistent in its sentencing for cases such as this. If I had a situation where my client was learning to be a plumber, electrician, etc., I would cite this case,” Heiskell says.

So, good luck on law school. Hopefully, the bar admissions people will see this as an accomplishment worth rewarding like Judge Crane did rather than an opportunity to wield arbitrary power against someone just trying to make a living.

Do not place any wagers on that.

The Law Schools With The Most Conservative And Liberal Students (2023)
Posted on Thursday February 02, 2023

Start Hitting Yourself: Chemerinsky Considers The Interesting Question Of When A State Can Sue The State
Posted on Wednesday February 01, 2023

The Best Law Schools In America For Career Prospects (2023)
Posted on Wednesday February 01, 2023

Where The Most Wannabe Lawyers Live
Posted on Tuesday January 31, 2023

The U.S. News Ranking Methodology May Have Changed, But Law Schools Are Still Dropping Like Flies
Posted on Monday January 30, 2023

Law Professor Eager To Share All Sorts Of Awful Thoughts About Trans Folks And Racial Justice!
Posted on Monday January 30, 2023